Posted by HeyHeydaddio at 2:07 PM No comments:

Posted by HeyHeydaddio at 12:10 PM No comments:

Turn 24 hours into a 3-minute masterpiece.

Once your movie's up, you'll need to get everyone you know—and then some—to watch and rate it online. If your movie makes the top 25, you can host a showing at the Apple Retail Store. Your adoring fans can download it from the iTunes Store. And it'll be screened by some big-time industry players: John August, Doug Ellin, Jody Hill, Masi Oka, Jason Bateman, Paul Haggis, Greg Mattola, Barry Sonnenfeld.
Posted by HeyHeydaddio at 11:09 AM No comments:

Fifteen seconds of political silliness. One week BOC.
Posted by HeyHeydaddio at 10:38 AM No comments:

Posted by HeyHeydaddio at 10:33 AM No comments:


McCain has been pushed back and forced to Campaign in October in states that should have been locked up long ago, here is a preview.
Category: Comedy
Tags:
Bill Maher Real Time Red State
Posted by HeyHeydaddio at 1:29 PM No comments:

Get involved! NAB and CES in Las Vegas

Not being involved in the industyr is a big mistake for any student. You need to make sure you take advantage of evey opportunity to meet and mix with ther decision makers when they come to Las Vegas. Depending on your interst and degree, you need to be on the list. What is the list? I don’t know for you, but many studetns need to take advantqge of the conferences that come to Las Vegas. Going to them will eventuaqlly get you on the “list”. For starters, try:

CEA is the Consumer Electronics Association, the producer of the International CES. CEA represents more than 2,500 corporate members involved in the design, development, manufacturing, distribution and integration of audio, video, mobile electronics, wireless and landline communications, information technology, home networking, multimedia and accessory products, as well as related services that are sold through consumer channels. CEA's resources are available online at http://www.CE.org/, the definitive source for information about the consumer electronics industry.

Imagine a gathering of global professionals and solutions providers from every stage of the content lifecycle, from creation to consumption.The NAB Show invites you to be part of the IMAGINation.Join a virtual worldwide community of digital media, film, entertainment and communications professionals who may be connected only by their passion for creating great content and delivering it across multiple platforms. But together, you represent the IMAGINation. For one week in April, the IMAGINation becomes a real place. A meet-up of 100,000+ citizens, and a market made of 1,600 companies. This is a living, breathing city unlike no other in the world where imagination meets technology. A place where content comes to life – the NAB Show.

w.marcusbuckingham.com/home.php
Developing curriculum for teaching professionals can be a challenge. The senior faculty organized and created a faculty development committee. They volunteered to take over what is called Admin Week. With direction from the Dean of Education, the committee was charged with implementing a new technological leap for the school. This is tracked and part of the requirements for employment at the school. This workshop was to give 12 hours of specific training to migrate the faculty to this new product. The faculty development committee built the two-day workshop around the teachings of Marcus Buckingham. A provocative title was chosen for the conference: “Playing to Your Strengths as an Educator”. The faculty wanted to extend the workshop to allow more conversation and interaction. This was certainly a change for some previous Admin Weeks that people could not wait to end – or tried to slip out early. Engaging people whose job it is to engage people is a special challenge. By offering a variety of experiences, lots of interacting and teambuilding and an involving use of technology, the conference seemed to be a success.
Posted by HeyHeydaddio at 3:10 PM 1 comment:

Sepember 4, 2008: Thanks to some rather generous grants and sponsorships, we’re now able to open the 2008 Conservative Leadership Conference to the public absolutely…FREE. Please join us at this exciting and critically important get-together of conservative-libertarian activists, leaders and candidates in Las Vegas on September 18-21, 2008. And by all means, bring a friend. Or two friends. Or three…"

Although politically some of the ideas presented were not representative of my thinking I like ideas.. and even more... I like FREE!

Of interest to me was blogger Michael Brodkorb of “Minnesota Democrats Exposed”. He had been chosen to receive the annual Blogger of the Year Award. Brodkorb is being widely credited with almost single-handedly torpedoing the U.S. Senate campaign of “comedian” Al Franken this year. Rush Limbaugh, Fox News, and every major news outlet in his state have mentioned his blog.

His blog - the form - is hardly innovative. it is just a blog built on the free Wordpress platform. What makes him stand out is compelling content. He uses extensive promotional activities to get his content noticed.

In the late 1990s, Brodkorb worked for Minnesota senate Republicans where he learned how to do opposition research. He did it well enough to become director of research for the Minnesota Republican Party and served in similar roles for several Republican campaigns. Minnesota Democrats Exposed, however, is his personal blog, unconnected with his professional activities. Brodkorb says, “If you read Minnesota Democrats Exposed and can’t figure out that I am a partisan Republican, you are a moron. Turn your computer off and get your head examined.”

I met with him unexpectedly in a quiet room and we spoke for about 20 minutes. I asked him how he developed his blog and how he supported it. He was most gracious and gave me a lot of information on how to use the internet to connect with others and put action behind ones words. He even make money (Google ad words) off his blog - not much, just enough to support his personal mission. His blog is very local and has little meaning outside his home state - but it does, through his diligent work, really have an impact. I think his blog is a lesson on how to use the internet to get noticed and make a difference - regardless of your political leanings.

Having great ideas is one thing. Getting noticed in another. If you have compelling content and you work to get the work out - that is what I call authentic. Having great ideas, but sitting in bed with a paper bag over your head is not!

PS: the sumptuous ($150) dinner Saturday night at the Venetian (also free, thanks Sheldon Adelson, the media-shy owner of the Venetian) was wonderful. The speakers were loaded with provocative ideas, as was the dinner conversation. 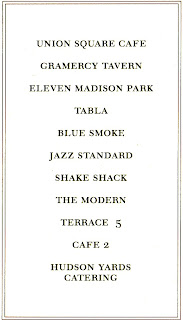 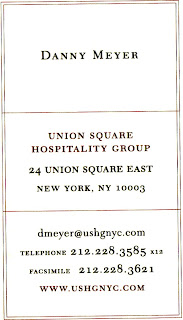 I got Danny Meyer's business card after my hearing him speak at HD2008 - Hospitality Design. I told him how interesting he was and invited him to the AILV for a visit next time he was in town. I gave him my business card to contact me. I think there is a 99% chance that he won't actually come to the school, but I know there is a 100% chance he would not have even known about the school had I not introduced myself and traded business cards.
Posted by HeyHeydaddio at 12:27 PM 2 comments:

(This book is in the school library)

At the conference, Danny shared the lessons he's learned while developing the winning recipe for doing the business he calls "enlightened hospitality." This innovative philosophy emphasizes putting the power of hospitality to work in a new and counterintuitive way: The first and most important application of hospitality is to the people who work for you, and then, in descending order of priority, to the guests, the community, the suppliers, and the investors. This way of prioritizing stands the more traditional business models on their heads, but Danny considers it the foundation of every success that he and his restaurants have achieved.

One “wickedly smart” idea was to plan for lots of corner tables. People like corner table to watch the action.

He offers authenticity. He relies on his own artistic vision. He sees this as authentic modern with real roots and offers a sense of grandeur.

To him, in a restaurant, noise is like salt to a chef. Too much is wrong, but too little is wrong, too. It has to be just right!

Hospitality in a restaurant is 51% about the food, but 49% is about how the experience make you feel.

Posted by HeyHeydaddio at 2:03 PM No comments: