Oakley Sunglasses at Night Art Tour joined AILV on May 21 at night in front of the school. In addition to a full Oakley gallery exhibit, beats being played by Oakley's resident DJ, and free food and drink, the event featured 40 pairs of Oakley sunglasses designed by students wanting to make their mark on the Oakley brand.

A week prior to the event, participating students at the Institute were given white Oakley Hijinx and very few guidelines. Leaving no material left behind, the students showcased their artistic talents on an Oakley eyewear canvas. 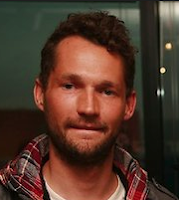 ew Petterson, who last year designed 50 handcrafted Oakley Frogskins, held court over the festivities. He is a freelance artist with an Oakley connection. Though a bright and Red Bull (and something else) fueled conversation, he revealed that he had been raised in Boise, Idaho and moved to the West Coast at age 19. He makes his living in the automotive industry as a custom paint designer. He freely admits that he has no creative control over his day job, so he uses his Oakley connection to express himself. Living in Huntington Beach, he is connected into that snowboard, skateboard young guy lifestyle that inspires the Oakley brand. Although unschooled, he was inspired by both his parents who were artists and educators. Though laidback, at 28 years old, he admits to an intense commitment to his creative energies. “I live this,” he says, “but I love what I do.” Induced to share his body art, he says he worked in collaboration with the tattoo artist to blend his original designs with the artistic ability of the other artist. They hooked up though a chance meeting with a mutual friend who had a tattoo that Andrew admired. The tattoo artist needed a paint job to rest 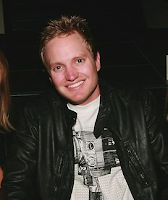 ore his car and Andres wanted a chest to knee tattoo and a deal was stuck. Visiting his third Art Institute, he admitted that for the first time that he was a little intimidated by the talent of the students at our school. The quality of the students work, both in the sunglass project and student work on display, impressed him.

Rett, the marketing manger from Oakley was equally excited about the school. He revealed that he like to continue our relationship. He suggested that he might be a good addition to our marketing classes. The target market for Oakley products is exactly the market that is hardest for current marketers to reach.

Try these site for more information and pictures!
http://oakley.com/community/posts/1377
http://www.944.com/nightsites/gallery/oakley-at-lv-art-institute/
Posted by HeyHeydaddio at 2:51 PM 1 comment: 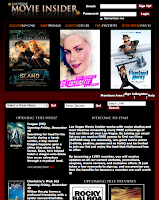 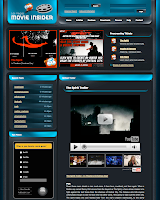 Above is the REAL LVMI, Nick's and them Lynn's.
To the left is the google search from today...

See the previous post! It seems that some of our student work is being confused with the actual websites they are redesigning. As an instructor, I have used this project a number of times. This confusion can be the result of a number of issues, but I think it clear that the students involved - Lynn and Nick - can be commended on well done work. Compare their proposed redo's of Las Vegas Movie Insider witht he actual website. Both Lynn and Nick came up as number 8 and 11 respectfully on a google search with the real LVMI coming up first.
Posted by HeyHeydaddio at 11:22 AM No comments: 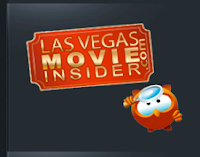 Some good news and some bad news... Lynn's webwork was so compelling that it showed up on a google search as the EIGHTH listing... and it is not a real site! This certainly shows how wonderful Lynn's work is and how well she designs her web pages. Unfortunately, the actual owner of the site, who supported our class project, discovered this problem and asked to have the site altered as not to cause confusion in the marketplace. Check them out!

This is what the original website owner thinks of the Web Marketing Class:

Thanks Frank, you’re awesome. I really love what they’re doing and I’m very honored that you use my website as a tool in your class.
It’s pretty cool!

Shawn Lane
Cheyenne Marketing
Posted by HeyHeydaddio at 10:28 AM No comments: 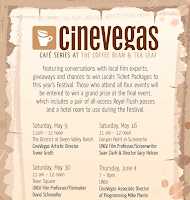 I went to the CineVegas Café Series over the weekend. The featured speaker was Trevor Groth. I’ve known him for about seven years, although I am not sure he knew my name for the first few. As a long-term volunteer for the festival, I have seen many changes. I think Trevor was one of the best. He has been involved with the Sundance Film Festival for many years: first as a volunteer, then as staff, then programming and he was recently promoted to Head of Programming for Sundance. I told him that he was the first person that I had seen interview on the Sundance Channel that I actually know.

As Artistic Director for CineVegas, he discussed the upcoming festival and opened the conversation to questions. I asked him what he thought of the article in the WSJ about the tightening of funding for independent films.

According to the article “Indie Films Suffer Drop-Off in Rights Sales” from the WSJ April 20, 2009, “In the latest challenge to the American movie business, a crucial source of funding for independent films -- sales of foreign-distribution rights -- is rapidly drying up… But today, due to factors ranging from the credit crunch to burgeoning online piracy, even the biggest names aren't always enough to sell an American film abroad.”

Trevor said, “ With the challenges of the domestic economy combined with the paradigm changes brought on by digita

l media and downloading, the industry is trying to figure out how to monetize films and filmmaking. While this is going on, the festival circuit may offer an opportunity to get your product out and be seen by the marketplace.”

Once upon a time, records (now cd’s) were the focus of the recording industry. Artist toured to promote their record sales. Now it is just the opposite. Recording and downloads help promote the touring and concert industries.

Again, from the WSJ article, says Mr. [Graham] King [a Hollywood film producer who won an Oscar in 2007 for "The Departed]. “With credit drying up across the globe, many foreign distributors simply don't have the capital to buy… At some point these buyers have to find some product for 2010 and 2011, so Cannes and Venice will be interesting,"

Certainly, the conversation on Saturday supported this contention. Trevor said that the submissions for both Sundance and CineVegas have never been higher.
Posted by HeyHeydaddio at 1:44 PM No comments:

Making Freelancing Work For You

In the Wall Street Journal, there is a report on how Web sites that advertise freelance work have been expanding, with some listing twice as many ads as they did a year ago. The sites — including Elance.com, Odesk.com and Guru.com — also feature opportunities in a wider variety of fields now, including accounting, law, engineering, sales and marketing. Many people also use Craigslist to advertise freelance gigs, too.

To be sure, freelancing is a juggling act in itself. The arrangement requires the ability to meet deadlines while always searching for and securing that next gig. There are also safety concerns if your job involves working with strangers. And working for yourself can have tricky tax consequences.

The good news is that many freelance job sites help simplify things by offering the option to create a free profile describing the services you offer. You typically can also upload work samples, post employer testimonials and complete competency tests in areas like software coding and email etiquette.

Do you think you have what it takes to freelance?