Lunch and a bunch of Festival Films!

The Nevada Film Festival offers film-goers a rare opportunity to meet the filmmakers. Directors, screenwriters, cinematographers and actors eager to share their work will provide an exclusive inside look at the industry during post-screening Q&A's. 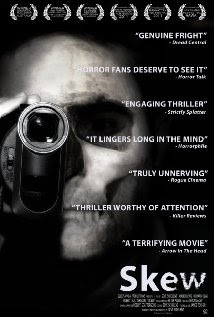 The surprise was “Skew”. I did not know anything about this film before it started. It began as a low quality hand held home video… but quickly escalated into much more. The lead actors head out on an eagerly anticipated road trip and they bring along a video camera to record their journey. What starts out as a carefree adventure slowly becomes a creepy and surprisingly shocking journey. For a ultra low budget film, it pack some surprising shocks.

The last film, and where I had a chance to meet and dine with the filmmaker, was "Menschenliebe", directed by Alexander Tusc

hinski, a young filmmaker from Germany. It was about a nerd that gets help with seducing women… inspired by 'Don Giovanni' in Mozart's opera! Although clearly a student film, it was fully realized and surprisingly fun.

I had lunch at the Irish pub at the Rampart Casino with Alexander Tuschinski, Phil Rached (screen play award) and Kerry Kazmierowicztrimm (really, that’s on his business card) (also a screen play award winner). It was interesting to discuss how to establish yourself in the industry with these recent graduates from across the country. The happy hour beer prices were kind a cool, too.
Posted by HeyHeydaddio at 10:52 AM No comments: