Posted by HeyHeydaddio at 8:58 PM No comments:

Posted by HeyHeydaddio at 2:43 PM No comments:

Posted by HeyHeydaddio at 1:03 PM No comments:

Posted by HeyHeydaddio at 9:04 AM No comments:

The fashion industry is sometimes criticized for unrealistic portrayals of young women. But if you're a woman older than 60, there are almost no portrayals, realistic or otherwise. Fashion may be something you have to invent more than follow.

A blog called Advanced Style focuses on women who've done just that. The blogger bringing their images to the world is 31-year-old Ari Seth Cohen. His idea of heaven is to wait in the freezing cold on a street corner in the middle of Manhattan hoping a fabulous-looking older woman passes by.

When he spots one, he rushes up to her, explains his project, asks for a photo and just generally tries to convince her he's not a weirdo. He's rarely turned down. 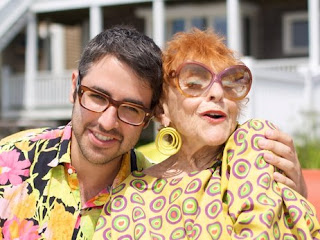 Cohen says the most influential people in his life were his grandmothers. He loved watching old movies with them and looking through their scrapbooks. And as a little kid, he became fascinated with the way women dressed in the 1930s, '40s and '50s. "I used to draw pictures of fancy older ladies as a kid," Cohen says.

He collected the drawings in a book, he says, and called it something like "Fantastic Ladies with Amazing Style." Blogger Ari Seth Cohen with Ilona Royce Smithkin, 93, one of his most famous subjects.

He didn't have anything in particular in mind when he moved there, though. "I didn't set out to be a photographer or a writer," he says. "I just wanted to do something that I felt inspired by and start sharing it with people."