This week at SIGGRAPH - AILV Professor 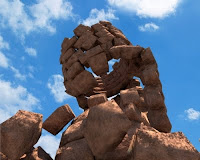 Our own Michael Baker of the Art Institute of Las Vegas spoke this week at SIGGRAPH. Now in its 38th year, the SIGGRAPH conference is the premier international event on computer graphics and interactive techniques. The SIGGRAPH conference attracts the most respected technical and creative people from all over planet Earth.

Michael was on the panel titles Destruction and Dynamics for Film and Game Production. He spoke on Authoring Destruction with the Dynamica Bullet Maya Plugin. The course was focused on “rigid-body and particle simulation and collision techniques used in breaking objects and large-scale destruction. He gave a brief introduction to the basic theory, and then the course continued with examples from specific films and games. Other topics included production aspects such as authoring tools (including the open-source Bullet physics library used in both game and film production) and computational and algorithmic issues.”

Posted by HeyHeydaddio at 11:46 AM No comments: