You got to have a Dream - anyone can start a business.

Described by Adweek as “exceptional,” the "Susie Lemonade" commercial (blogged previously) featured a little girl running her own lemonade stand; the entrepreneurial Susie successfully develops her sidewalk stand into a full-blown business with the help of her father’s Verizon smartphone.

What started out as simply a fun and noteworthy advertisement now has the potential to develop into a long-running, memorable, and engaging campaign. Affiliations with charities are nothing new for branding, but in this case, the correlation between Susie’s Lemonade and Alex’s Lemonade Stand Foundation is so beautifully appropriate — both young, ambitious girls starting lemonade stands.

Now, the agency and client have added a fun little charity element to it. According to McCann, the only known bottle of Susie's Lemonade was put up for auction on eBay to benefit a charity called Alex's Lemonade — an organization dedicated to fighting childhood cancer. In the eBay listing, Susie explains: "The best part about building your own lemonade business isn't having a giant trampoline in the conference room, or jellybeans in all the water coolers, or even water balloon Wednesdays. It's having the opportunity to give back. So I'm auctioning off the very first bottle of Susie's Lemonade to come off the production line to raise money for a great charity started by a very brave little girl and her own lemonade stand."
Posted by HeyHeydaddio at 9:15 AM No comments:

In the animated Disney film, Tangled, the pub thugs sing:

Though my face leaves people screaming 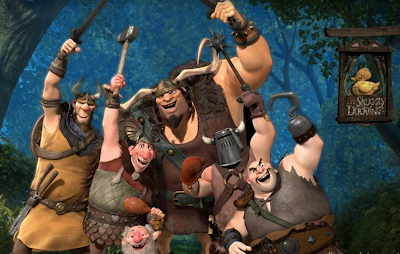 There's a child behind it, dreaming Like everybody else,I've got a dream
Tor would like to quit and be a florist Gunther does interior design Ulf is into mime,Attila's cupcakes are sublime Bruiser knits,Killer sews,Fang does little puppet shows And Vladimir collects ceramic unicorns

Flynn: I have dreams like you,no really Just much less touchy feely They mainly happen somewhere warm and sunny On an island that I own Tanned and rested and alone Surrounded by enormous piles of money

The Dollar Shave Club... has men in a lather.

The e-commerce start-up opened its doors just a few weeks ago, and has already developed a following for its quirky approach to hawking razors and blades for a $3 to $9 monthly fee.It began with a YouTube video, in which founder and Chief Executive Michael Dubin variously rides on a forklift, plays tennis, and dances with a fuzzy bear. It's already received some four million views.

Dollar Shave's motto? "Our blades are f— great."The Santa Monica, Calif., company won't disclose its number of customers, only noting that 12,000 people signed up in the first 48 hours.

Verizon Ad
Posted by HeyHeydaddio at 8:42 AM No comments:

Examples of Student Work
Posted by HeyHeydaddio at 8:42 AM No comments:

Selling Chocolate
Posted by HeyHeydaddio at 8:41 AM No comments: