Costa, Gabriella http://ailvfortunato.blogspot.com/
Posted by HeyHeydaddio at 11:54 AM No comments:

Nobody listens to me!

Consumers frequently report "lack of content" as an obstacle to widespread 3D adoption, but most industry conferences focus on technical aspects or integration of 3D into consumer electronics devices. Leaders from the content side to told of their plans for the future of 3D content to the home. I think this is wrong. The real problem with 3D is it is not a viable home product. I just don't think people want to watch re-runs of "Two and a Half Men" in 3D? 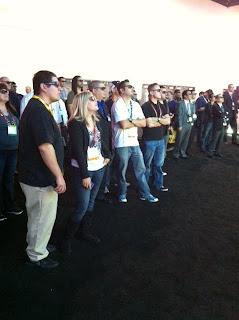 zed, but it did not hold their interest long. They lined up and then disappeared. Sony introduced "glasses Free" 3D. Kevin Sintumuang of the Wall Street Journal said in a tweet, "A few glasses-free 3-D prototypes this year. If you want to know what they look like, cross your eyes, spin around and take a shot of vodka."

I agree!. Just a few minuted of the demo and I was on my way. I was not alone. I did notice that no one hung around or made a fuss over the display. It was just there.

Sessions focus on 3D, over-the-top services (delivery of content directly to CE devices) and trends in mobile entertainment. Panelists are top executives from manufacturers and Hollywood studios, including Disney, Dreamworks, EA, ESPN and Warner Bros. They tried to build excitement... I did not see it in the crowd.

The picture was taken at the Samsung booth. The display is really impressive, but I love my picture. It reminds me of the famous Apple commercial for 1984, don't you think?
Posted by HeyHeydaddio at 11:06 AM No comments:

CES!
Posted by HeyHeydaddio at 11:03 AM No comments: