Nikon at CES - you should have been there! 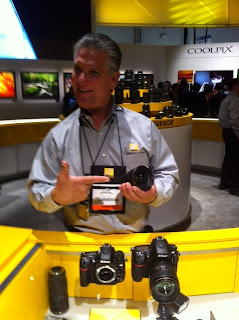 Nikon has a new camera body. Super light. Here’s the West Coast Sales Manager that I met at CES. He demonstrated the unique super light camera body. The cost was about $2,100. At Costco it is still $2,100 but you get a bunch of free extras.

The D3X produces film quality. The image size is mind boggling and the ease of operation is so simple. I can operate the D3X easier than a P&S camera. Along with the use on Nikon Capture NX2 to process the RAW NEF captures is unbeatable. The D3X is as close to using a view camera as I have ever experienced. If were to compare the D3X to an automobile it would have to be compares to a 12 cylinder Mercedes Benz with all of the features in that high end model.
Posted by HeyHeydaddio at 8:01 PM No comments:

CES was.. well... not as exciting as it has been in the past

I was not alone in my dissapointment. I had a good time, but CES was evolutionary not revolutionary... 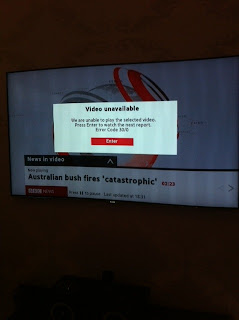 This was at one VERY expensive booth... and the video did not work.. at a video equipment company!

Can you think of anything else that’s actually worthwhile we’ve seen this year? I don’t consider Huawei and ZTE devices we’ll never see in the US, or Intel’s new downmarket chipset, exciting. Qualcomm unveiled some new chips at an absolutely insane keynote, and these chips do things faster and better..er.

But come on, they’re processors – if they didn’t get faster every year, something would be seriously wrong. I’m not saying they’re unimportant (they’re obviously very important), but chip announcements at CES (the CONSUMER electronics show) are low-level nerd stuff that the average person couldn’t care less about.

Verizon 4G-ified Note 10.1. LG unveiled some new Google TV that isn’t really new and really doesn’t do anything cool, and basically nothing else. Toshiba brought zero new Android products. Acer came with its already-announced $100 tablet, and it’s awful, and actually costs $130-150, which makes it exponentially worse.

And oh boy, somebody made the world’s thinnest phone for the fiftieth time. Huzzah.

Holiday Tie-up between Neiman Marcus and Target is a flop. 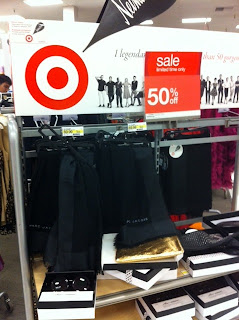 It's official: The odd holiday tie-up between Neiman Marcus and Target is a flop.

I took this picture at the Target in Silicone Valley - where people have money for the real  Neiman Marcus and even they did not seem to attract interest!

Target this week slashed prices by 50 percent on a slew of exclusive fashions and accessories from designers like Marc Jacobs, Proenza Schouler and Diane von Furstenberg. Target had launched the collection from 24 top designers at the start of the month in an unusual partnership with Neiman Marcus, whose swanky stores have been carrying the same goods. A splashy marketing blitz that included pricey print and TV ads had predicted shopping frenzies and quick sellouts, limiting shoppers to five items each.

But the “cheap chic” merchandise evidently wasn’t cheap enough. A canvas tote bag by Oscar de la Renta on Target’s website yesterday was slashed to $29.99, from $59.99, while a wool and cashmere Marc Jacobs scarf was selling for $34.99, down from $69.99. A Tory Burch lunch box, featuring an antimicrobial lining and a two-way zip top adorned with the label’s signature “T” logo, was advertised at $9.99, lowered from $19.99. “It’s a new program,” said Target spokesman Joshua Thomas, when asked if the retailer considered the upscale launch a disappointment. “Like any new program, Target will look at the results to determine how we move forward.”

The best move might be to not move forward at all, according to some industry experts.